Having Everything You Need in the Truck 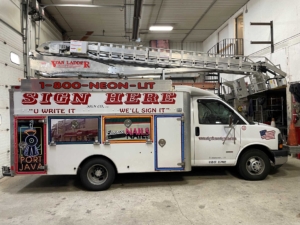 When his truck was new, Howard Vobis dubbed his 2006 Van Ladder the Flying Freddie in tribute to his father (Fred Vobis) who served in the Army Air Corp during WWII. During a recent visit to our shop to have his sixteen-year-old Van Ladder overhauled, we asked Howard why he gave his father’s name to his bucket truck. He told us it had to do with his father’s zeal for efficiency. Here’s the story:

“One thing about the WWII veterans,” said Howard while standing next to his truck— “if they didn’t know how to do something, they figured it out.” Howard credits his father’s amazing ingenuity for fueling his own desire to maximize efficiencies in every facet of his life.

In his sign business, Howard strived for one-and-done service calls. He wanted his truck to be a mobile warehouse so his technicians wouldn’t need to leave the jobsite to chase after tools and inventory. To accomplish his goal, though, Howard needed a specialized service body with a variety of storage compartments.

In 2005, Howard met Dave Peterson (our company president) at a sign show in Atlantic City. Dave listened to Howard’s vision for the perfect service body for sign work. Then Howard listened to Dave’s plans to make the Van Ladder’s bucket go to the ground. Howard became excited. “When you have that figured out,” he said, “and you’re happy with it, let me know and I’ll special-order the chassis and box that I’ve been dreaming about. 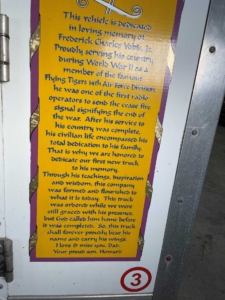 The two men’s visions aligned in 2006. That’s when Flying Freddie was commissioned. Howard said the efficiencies exceeded his expectations, so in 2009 he ordered Freddie’s twin brother, which is also still in daily service.

Here’s what Howard said about Flying Freddie: “As far as I’m concerned, this truck will never leave our fleet . . . It’s a tribute to him. It’s served us well, and I really can’t brag about it enough. I think that this configuration with the Van Ladder is the perfect service/installation truck, small size, for the industry.”

As you can see by the photo above, the body that Howard special-ordered sixteen years ago, is very close to the Workport body we use today. The point being, we listen. Our customers are the ones spending their time dreaming about faster, safer, and easier ways to accomplish their work. Listening to and acting on those ideas is the greatest privilege we have at Van Ladder.

Howard: That’s one thing about Van Ladder—you guys are always thinking and trying to improve things.

Me: We’re just stealing your ideas.

When to Buy a Bucket Truck for Sign Installations