When to Buy a Bucket Truck for Sign Installations 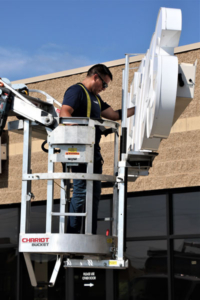 Ambro Alvarado owns an Image 360 franchise in Bloomington, MN and Apple Valley, MN. At the time of this interview, Ambro had owned his Van Ladder Bucket Truck for just over one year. Ambro had far more wisdom than I could possibly pack into a three-minute testimonial video, so I saved some nuggets for this blog. What follows is a portion of our interview discussing the topic of when to purchase a bucket truck.

Ambro: Yes, in the middle. They get stuck in the middle. I think that if you’re going to make an investment like this, you must be 100% confident, not in what the truck can do, but in what you can do to keep the truck busy. I think for us, we got to the point where we were right on the threshold of, “Should we continue outsourcing all of this or is it time to invest?”

I knew that it was the right move for us. And I was confident enough that having the truck would generate more business because I saw it coming our way already. I saw the trend, and it was time. But now looking back, I wish that I would have purchased the truck years ago instead of buying my flatbed printer, which still cost me $125,000, anyway. So those are the kind of things that, as a business owner, we learn, and we try to adapt to the changes. We think back three or five years, and say, “If I would have bought the truck three years ago, or five years ago, where would I be now? Needing a second one, right?

Me: When I was watching the video of an installation you guys did in Rochester, it kind of reminded me of a magician taking stuff out of his hat. You had all those signs, and they just kept coming out of the truck.

Ambro: We packed up all of those signs, and I didn’t think they were all going to fit in there. It’s amazing when you look at those photos, how big the sign is, and the space that we have in the truck, and when we packed everything up in there, we were still able to shut the door. 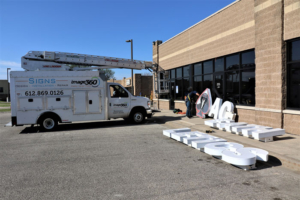 That’s why it’s not just a transport, it’s everything that you need to do the job well. Because all the tools that we have—everything is in the truck. I remember having to run to Depot (Home Depot) because we’re missing this, leaving the installation because we’re missing this. It’s money out of your pocket. Do you know that we put up all those raceways in just an hour and a half? Hour and a half—incredible! So we ended up doing three additional site surveys for the landlord the same day in Rochester. We did a panel cabinet for a different customer, those raceways, and we snuck in three surveys that same day. So when you talk about time management and the things you can really capitalize on to save money and make money at the same time, that’s the way to do it. 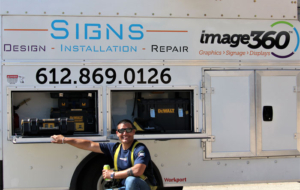 Me: Do you see that someday there may be more trucks?

Ambro: I’ve already talked to the guys. I talked to the guys and said, “You know what? I think we need a second truck.” We have people splitting out now for installations. One of the guys has to finish with the truck while the other guy goes and preps the other site. When the first guy’s done with the install, he drives the truck over. So again, you have to understand when it’s time. And if we continue trending the way we have, it may not be long before we reach out again and ask for another one.

Conclusion: I agree with Ambro’s assessment. Don’t shell out money for equipment without a solid plan to utilize its capacity. At the same time, trust that the equipment itself will attract new business (especially when the equipment serves as a traveling billboard). Keeping these two considerations balanced should prevent you from buying too early or waiting too long to pull the trigger.

Having Everything You Need in the Truck
Scroll to top